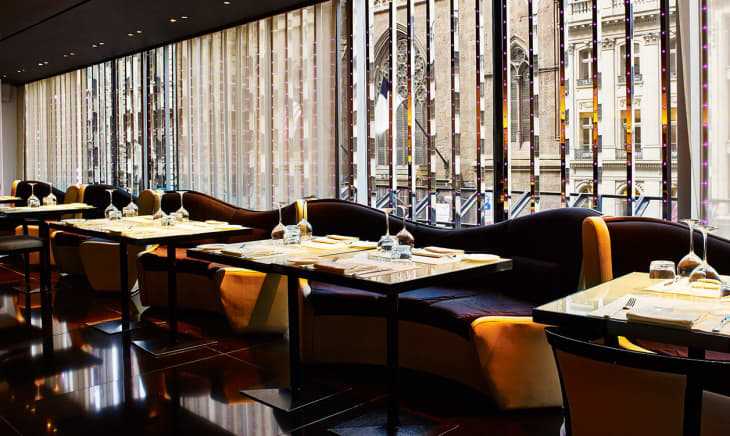 Shopping and dining are both enjoyable experiences, but usually we do them in different places. If pressed to come up with a modern example of a store that incorporates a restaurant, you might think of Cracker Barrel, or the Rainforest Cafe — both charming in their own way, but not exactly upscale experiences. But in the not-so-distant past, an in-store restaurant was an important part of many big-city department stores — and now, a handful of luxury shopping destinations are bringing that marriage of food and retail back.

For years, fans of the film Breakfast at Tiffany’s would snap photos with pastries outside of the jewelry store’s Fifth Avenue location. Now, with the advent of their Blue Box Cafe, you can really have breakfast at Tiffany’s. Since 2009, the Armani store on Fifth Avenue has boasted a very pricey restaurant . Urban Outfitters has been experimenting with restaurants in its stores since opening an Umami Burger in one of its Los Angeles locations in 2009 . Even Barnes & Noble is getting into the game, with a handful of Barnes & Noble Kitchens , in-store restaurants that serve things like wine, beer, avocado toast, and a dish of beef short ribs for $26.

When I was pitching this story, Arlyn, our Design Editor, asked a salient question. “Department stores have done this forever,” she pointed out — “but why is it spreading now ?” Here’s my guess: thanks to online shopping, the landscape of retail has changed. You don’t have to go to a store in order to buy things. In fact, it’s often easier not to. But one persistent advantage of brick and mortar stores is their tactile quality — the ability to see, touch, and feel the wares in person. And there’s also the experience of shopping itself — the look of the store, even the smell. Having a restaurant in the store contributes to that, making shopping less like an errand and more like a destination in its own right.

Fashion designer Todd Snyder, whose new Manhattan flagship store is centered around a tapas bar called the El Rey Annex, alluded to this when speaking to the New York Times :

A cafe softens the place, making it less about shopping and more about community, where you are eating food, drinking wine, hanging out with your friends. Just a store is boring, and you can do this online.

Of course, places like IKEA and Target have been offering food in their stores for a long time. (I’ve definitely been known to grab a hot dog after making my way through IKEA’s massive showroom.) But these new ventures are designed less as a way of encouraging customers to stay in the store once they get there, or refreshing them after a long trip, and more as a way of drawing people into the store to begin with. Marc Metrick, the president of Saks Fifth Avenue, spoke to the New York Times about the changing role of restaurants in retail:

“Once they were a place to eat whilst or after shopping. Now they are the destination for shoppers before they shop. In the past, the restaurants were developed to keep customers in the store longer and spend more. Now restaurants are a way to attract people into store.”

Of course, it remains to be seen whether anyone will choose to go to Barnes and Noble to spend $16 on a hamburger. Retail is currently in a state of intense upheaval, but it’s possible that the future of retail is very, very delicious.